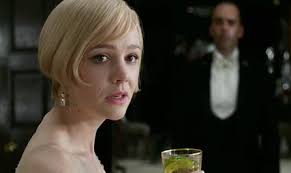 The Great Gatsby is possibly the greatest love story ever told and Baz Lurhmann has rendered this telling truly immortal with his usual optical sumptuous feast. The genius of F. Scott Fitzgerald channels the existential torment contemporary to the post WWI world further precipitated by his wife Zelda’s unrealized artistic talent and their corresponding unrealised union into the precise moment where the soft gauze of romanticism deteriorates into the sharp slated slap of cynicism, Pop Art? or by its more common name – alcoholism. This point lies somewhere between, in the air or the breath that separates Jay Gatsby and Daisy Buchanan nee Faye.

Will you still love me … when I am no longer beautiful …?

F. Scott’s prose is hard to top but Baz does a magnificent job in a comparable art form. This production illustrates more of the subtext and brings out the inner lives of the characters in a way that previous renderings have not. Fitzgerald’s prose conveys the air of politeness reflecting vaguely remembered but largely misunderstood principles of chivalry and the protection of the delicate and fragile essence of that which is feminine, beauty – is truth – is beauty.

You want too much …

This leads to a different telling of the story when you compare the one on the page to the one between the words. The language of a glance, a quickened pulse, a sharp intake of breath – of concealed tears and looking away – of what is not said, but understood – in the silence that is because all the words in creation are insufficient to convey the experience of beholding truth. All of this to protect, the dream – that which once was? Could have been? Will be again? Ofcourse, absolutely – yes. It must be – I have to believe it is, it can be, it will be again.

Nick our incorruptible untouchable narrator and possible alter ego of F. Scott himself – is transformed by his mercurial encounter with the quicksilver that moves between Daisy, Tom and Jay, the pivot between the world of the cynic and the romantic. F. Scott once said – perhaps in self reflection,

“…I was then living, not caring much, not thinking how much had been left undone, or what would become of this and that responsibility, like people do in books; I was well insured and anyhow I had been only a mediocre caretaker of most of the things left in my hands, even of my talent.”

Nick tells this tale of warring philosophy from his vantage point of narrator and the safety of a psychiatric hospital – unable we assume to reconcile these disparate and terrifying world views. Baz draws out these themes by developing the role of Tom Buchanan further and playing him off against Jay Gatsby.

Check out the Dark Side for an unexpected interpretation of the story ‘with Daisy’, Zelda, I mean. Everybody is so dark on her because she returned to Tom – but let me tell you a different version of Daisy, Zelda – I mean. F. Scott captured her image, maybe her essence and interred her to a dimension without oxygen where she will be forever young. She will never inhale again – but she will also, never die.